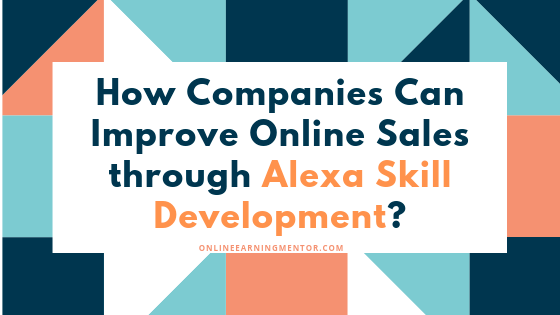 How Companies Can Improve Online Sales through Alexa Skill Development?

A smart speaker is a speaker connected to the Internet with an integrated virtual assistant that receives commands from a voice interface and thus allows different interactions.

The intelligent speakers are for the use of Internet-based services on audio and let you control via Wi-Fi or Bluetooth devices connected within the home automation (smart home). Later you can install other functions, the so-called skills. In the Alexa Skill Store, more than 50,000 external Alexa skill developer are available, which can be activated for free based on your needs.

What is an Alexa skill?

The Alexa Skills are programs that can be activated online and expand the range of functions of the Alexa voice service.

Technically an Alexa skill is composed of a user interface (called front end) and the logic of the program (the back end).

Any smart device that supports the Alexa voice assistant performs the front end function of the Alexa Skills, such as an intelligent Amazon Echo series speaker or a connected LG refrigerator.

The logic of the program in the back end works on its own server or on the basis of AWS Lambda, a data processing service made available by Amazon.

Prerequisites for the Development of Alexa Skills

Tutorial: create your own Alexa skill in five steps

The process of creating your first custom Alexa skill consists of 7 steps that lead you to the release of the application:

We clarify the development of a skill for Alexa with a simple example.

Jess is the owner of a sandwich kiosk in Bend, Oregon, called Flour Pot Sandwiches. The activity is well known among customers looking for healthy and fast food.

The kiosk is located in the centre of Bend and Jess would like to meet the needs of its customers and have an online site, where the products and services offered are listed.

Thus, in addition to a web page, it will also create a skill for the voice assistant Alexa.

First, it starts with the development of a skill, using Alexa's voice interface, thanks to which its customers can learn about the opening and closing times of Flour Pot Sandwiches.

What is Direct Marketing and What Are Its Benefits?

The Importance of Being Ranked High in Search Engines!

7 Tips To Help You Stay Focused, Motivated, And Productive At Work!